How to convince your friends to eat less meat

We often see a sustainable diet as an individual problem. But convincing one other person to change a little is much more important than making perfect choices yourself. So how can you talk to friends and family about eating less meat?

Main learning: helping others to replace beef makes a bigger difference than perfecting your own choices
Goal: convince at least one person to replace beef with pork or chicken
Impact: High 🌍🌎🌏🌍⚪️

If you are trying to eat more sustainably, the supermarket is a terrible place. You face so many dilemmas.

Should you take a cucumber without plastic or the organic cucumber that comes in plastic? To buy or not buy an avocado? Choose canned tomatoes or fresh tomatoes?

In those situations, it’s easy to forget that eating perfectly sustainably is impossible in an unsustainable food system. You simply cannot make the right decision all the time. On top of that, a lot of those dilemmas are so detailed that they hardly make a difference compared to reducing meat and food waste.

Once you’re eating less beef, the second-best thing you can do – along with wasting less food – is convince one other person to do the same.

Talking to other people is not usually part of the advice on how to eat sustainably. We often tackle those issues by looking at what’s in our own power. But food is not an individual act. Food is social and the solution to sustainable food should be social, too.

So what’s the easy and guilt-free way to influence people to eat less meat?

It’s about relationships, not logic

Let’s start with what doesn’t work: convincing people with logical arguments that they should become vegetarian or vegan. This is not how humans work.

It’s easy to get frustrated about how irrational people are. There are so many moments where humans are presented with perfect arguments and then still act the other way. We are not rational machines and that’s a beautiful thing. Humans are moved by stories, love and relationships. Humans are beautiful beings, but we are not rational.

As humans we want to belong to our kind of group. We want to feel safe and accepted. And in most communities, the current ‘safe’ and ‘normal’ option is eating meat. Eating meat is the standard option and it can feel risky to break away from that.

So instead of confronting people with all the problems of meat, we need to show them that there is also a ‘safe’ space for people who want to eat less meat. This feeling of belonging is one reason why so many people don’t want to be vegan or vegetarian. They don’t want to be identified with ‘those people’.

The urge to feel accepted and safe also means that trying to convince people with negative facts is useless. If I feel threatened by what you’re saying it goes in one ear and out the other. This is exactly what happened to me.

I was always a big meat eater and after lots of videos and information about the negative effects of meat I was slowly changing, but it took years and years. And then I found Drawdown. In that book, scientists calculated 100 solutions for climate change and eating less meat was on number four. This completely opened my eyes. Instead of hearing about the problems, it showed me the solution and how big of an impact it can make. That insight was the reason I started Fork Ranger.

People are not convinced by scientists, politicians or NGO’s. People are influenced by their friends and family. And this influence happens whether you like it or not.

So how do you convince other people? What do you say or do?

In my experience, it starts with our perspective on meat. What resonates with people who eat a lot of meat is to highlight how meat should be a luxury product. Instead of having it every day, it should be something special that we enjoy in the weekend. This way you can buy more delicious and more expensive meat. It can be a win-win situation: we are doing something good for the world while also enjoying meat more because it’s not taken for granted.

The most important part about convincing other people is to keep the first step as easy and simple as possible. The author of One small step can change your life explains that if you confront people with an uncomfortable change, their brain goes into ‘fight or flight’ mode. Some people like a challenge and will fight for it. But the majority reacts to threatening situations with ‘flight’. In this case: stick your head in the sand and continue as usual.

The key is to offer a first step so simple that it bypasses this system. It should be so easy and unthreatening that it almost feels ridiculous not to do it. And the easiest first step with a massive impact is to replace beef with pork or chicken. This step alone can reduce someone’s food impact by 21%.

We’re often tempted to skip ahead and tell people to replace beef with plants. But that jump might be too big and could activate their ‘fight or flight’ mode.

Telling someone to replace beef with pork or chicken is safe and easy. Once they accept that fact it’s a lot easier to then also eat less meat in general. They will probably make that connection themselves. By providing a safe solution you’re inviting them to take their own path instead of forcing them to follow your solution. It creates acceptance rather than resistance.

Influencing other people to change is hard and sometimes it feels like you’re not making a difference. I definitely feel like that from time to time. In those moments I always think of the video Leadership lessons from dancing guy. I highly recommend you watch it.

It starts with one crazy guy dancing on a grass field. After about a minute, one more person joins him. The video is only three minutes long, and almost halfway through, only three people are dancing. But in the second half of the video, more and more people join until hundreds of people are dancing around. It takes one minute to grow from one to three people and another minute to grow from three to a hundred.

We often see ourselves in isolation and forget that we are part of a social network. We are the dancing guy who is only focused on getting the dance perfect, instead of inviting other people to the dance.

What’s really motivating is that you don’t need a majority to change the status quo. You only need 25%. In one experiment, people had to work together to agree on a social norm. Everyone would get money to stick to this social norm. Then they asked a few people to change the norm they had just agreed on. When 25% of the members asked for the change, the whole group then agreed to change despite the fact that the other 75% would be paid much more if they didn’t change. The social pressures became more important than the financial rewards.

Right now we’re at the stage where only two or three people are dancing. Don’t worry about the people who hate the idea of eating less meat. Focus on your friends and family who are open to it. Every person who joins makes a big difference until suddenly, the movement will spread to the rest of the group.

Convincing a person to replace beef with chicken or pork can reduce their food impact by 21%. That’s more than you can achieve by optimising what kind of cucumber or tomato you buy. Instead of perfecting our own choices we must involve the people around us.

Simply being friends with people and talking about food will influence people. Don’t try to convince anyone. Just be yourself and show people how fun and delicious it can be to eat less meat. Your influence is bigger than you think. The key is providing a safe space to join the movement instead of creating a high entry barrier.

What’s your best tip to talk to other people about this topic?

Nuts and the search for sustainable protein 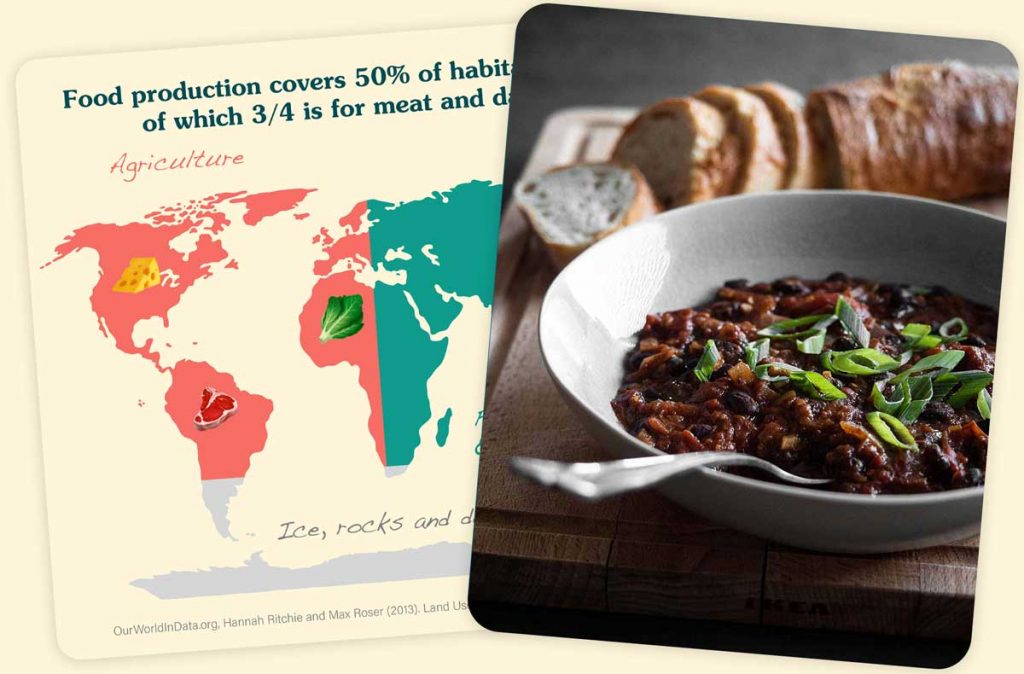